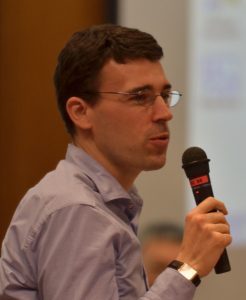 ACADEMIC AND RESEARCH BIO
Sebastian Veg is a Professor (directeur d’études) of intellectual history of 20th century China at the School of Advanced Studies in Social Sciences (EHESS), Paris and an Honorary Professor at the University of Hong Kong. He was director of the French Centre for Research on Contemporary China (CEFC) in Hong Kong from 2011 to 2015.

His doctoral research was devoted to literary and political debates about modernism and democracy in the May Fourth era (Fictions du pouvoir chinois. Littérature, modernisme et démocratie au début du xxe siècle, Paris: Editions de l’EHESS, 2009), followed by a second project on the new intellectuals in China since the 1990s (Minjian: the Rise of China’s Grassroots Intellectuals, Columbia UP, 2019). He was the co-principal investigator for a France-Hong Kong research grant on “New Approaches to the Mao Era: everyday history and popular memory,” and editor of Popular Memories of the Mao Era (Hong Kong University Press, 2019). Most recently, he has published a series of articles on cultural and political debates in Hong Kong since the handover.