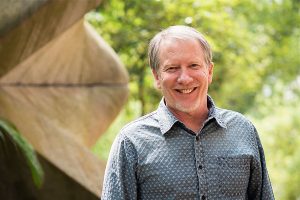 ACADEMIC AND RESEARCH BIO
Professor Gray Kochhar-Lindgren has been Director of the Common Core since June 2014. Prior to joining HKU, he served as Professor of Interdisciplinary Arts & Sciences, the inaugural Director of the First Year and Pre-Major Programmes, and the inaugural Associate Vice Chancellor for Undergraduate Learning at the University of Washington-Bothell (just outside of Seattle). With a PhD in Interdisciplinary Studies from Emory University, in 2009-10 Gray served as a Fulbright Scholar in Hong Kong, teaching The Postmodern City for Comparative Literature, Kant’s Critiques for the Department of the Philosophy, and working with six other Fulbright colleagues as consultants on Hong Kong’s 2012 Curricular Reform.

In 2019, Gray served as the Lead for Transdisciplinarity-in-Action, which won the Outstanding Teaching Award (Team) from both HKU and the University Grants Committee (UGC). Team members included Gina Marchetti (Comparative Literature and Film Studies), Xiao Hu (Digital Cultural Heritage and Social Data Science), Julian Tanner (Chemical Biology and Nucleic Acid Nanotechnology), and Mathew Pryor (Landscape Architecture, Ecology, and Sustainable Development Practices). Since 2016 he has been co-facilitating, with Rick Dolphijn of Utrecht University and an Honorary Professor in Comparative Literature at HKU, the More-Than-Human-City undergraduate exchange; in 2017, he founded GLADE (Global Liberal Arts Design Experiments), an international consortium of holistic cross-disciplinary programmes; and since 2020 he has been directing both the new Transdisciplinary Undergraduate Research Initiative as well as Critical Zones: Gender, Cities, and Well-Being, a project funded by the UGC Teaching Award.

Gray is a Principal Fellow at Advanced HE (London), a Fellow of the Hong Kong Teaching Excellence Alliance (HKTEA), and a Fellow at the Andrew Mellon Foundation & Notre Dame’s Philosophy as a Way of Life Network. He also serves on the Board of Directors of Folded Paper Dance & Theatre (Hong Kong) and sits on a number of international advisory and editorial boards.