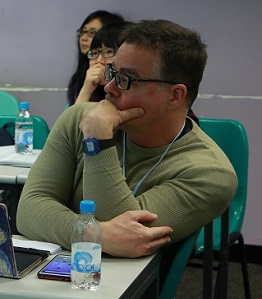 Daniel Vukovich (胡德) has worked at Hong Kong University in the School of Humanities since Fall 2006, after earlier years as faculty in communications at Hocking Technical College and as a lecturer at UC Santa Cruz. He is the author of two critically acclaimed, polemical monographs, China and Orientalism: Western Knowledge Production and the PRC (Routledge 2012) and Illiberal China: The Ideological Challenge of the P.R.C. (Palgrave 2019) as well as two dozen journal articles and book chapters. His work has been translated into Chinese, German, and Portuguese, and he serves on the editorial board of two international, inter-disciplinary journals: Humanities and Social Sciences (Springer), and the venerable Neohelicon: Acta comparationis litterarum universarum, the first international comp lit/comparative studies journal of Europe (AK Press and Springer).

Recent essays include “A City and a SAR on Fire” for Critical Asian Studies and “A Sound and Fury Signifying Mediatisation” for Javnost: The Public. His forthcoming monograph, After Autonomy (Palgrave), offers a theoretically-driven analysis of Hong Kong and global politics after the rise of China and the resurgence of xenophobia, Sinological orientalism, and fascistic social movements that subtend the decline of American/Hong Kong/liberal intellectual and moral hegemony.
Last but certainly not least, he teaches frequently and with enthusiasm for the Comp Lit program, offering classes in a range of canonical and heterodox subjects from world literature and culture to political theory, Chinese rebellions and revolutions, and the globalization of ideas and discourses.