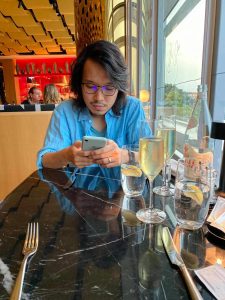 ACADEMIC AND RESEARCH BIO
Leiya was a maths and science student before deciding to completely switch fields to do Film, and Music, for his BA at Kingston University London. He then got his MA in Film and Screen Studies at Goldsmiths, University of London, before completing his PhD in Film back at Kingston in 2017. With an inter- and multi-disciplinary approach, he is primarily interested in borrowing concepts of time travel to understand all things moving-image: film theory and film-philosophy. Other research interests include psychoanalysis, remakes and adaptations, continental and analytic philosophies, translation, postmodernism, digital media and hybrid cinematic forms (such as YouTube and video games). He has also worked as a freelance music composer and sound engineer for a brief stint.